With a heavy heart. That’s my answer, and it actually surprises me a bit.

Asbjørn is someone whom I got to know in Vardø during my residency there. Thanks to him, my “one day residency” in Vardø turned into an extremely rich several-day stay—nearly a week, in fact. Asbjørn is also a photographer, an artist. We get along well and share a common wavelength. It’s good being able to discuss things with him, ask questions, have fun, explore the area. He’s an anchor point in the here and now.

Two days before my departure, we once again drive part of the E75. Together. Southbound. My thoughts instantly take off. A hundred kilometers a day, and we’d eventually, invariably arrive in Sitia. With winter tires, of course. Lapland is now in the midst of a cold spell, with storms and snow—in June. To put that in perspective: Lapland is where I’d recently gone swimming in a lake and sat on a blanket at the lakeside, eating Kurdish dolma.

Then there’s a little stab of regret that we’ll be turning back after just a few kilometers. Once again, I hop out to take pictures. And I even succeed in taking one with the potential to be exhibited. My final picture of the E75 project! Then we drive over to the island, to Vardø, via a tunnel—500 meters after which lies the beginning and end of the E75, out where the ships are moored.

How to bring this part of the project to a worthy conclusion? The answer: by ship—northbound, as I’m now accustomed.

What remains? That can’t be answered in a single sentence. The project will continue, of course. And the blog will be continued in a corresponding form—to process the many encounters, the many intersections, all of that. 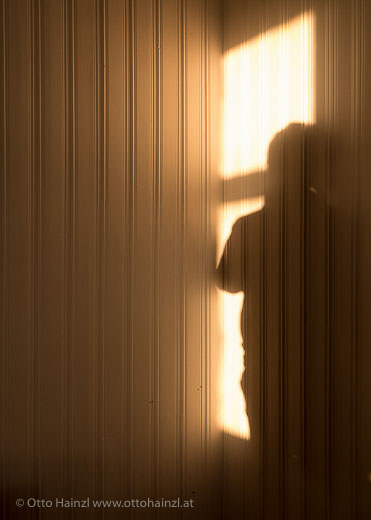 Midnight recently at the museum (Vardø)

First as thoughts, then as part of the project. There are things to research. Photos to be selected. Curators to be met with. Exhibitions to be planned. All this will be setting the tone for me over the next few years.

As to this first stage of the project, it remains for me to say thanks. To state my thanks in detail here and now would overwhelm me a bit; I’ll get to that. But for now:

It was a large number of people who lent me their support so that this project would succeed. First off, a huge thank-you goes to my wife and my friends at the project’s home base. They had my back, solved problems, translated texts, and kept everything running. It’s a union of fantastic people, of friends, who took joy in constantly following and supporting the project. They enabled it to succeed. And to the numerous people along the E75 who allowed me to take their portraits, who talked with me, each of whom contributed to the success of this project by being who they are, I’d like to extend my heartfelt thanks. It was often impossible for me to comprehend the intense hate that’s currently making the rounds in Europe and about which I read so much. For me, this was a journey rife with fulfilling encounters and without any notable problems. And I’m thankful for that.

Also for the fact that you, the reader, have followed my project. For me, it was great to feel so connected. I will continue blogging, of course, if not quite as regularly. So stay tuned!

I hope that the upcoming publications and photos will succeed in conveying how intense all this has been so far.  And I’d be very happy if you continued to follow my work—that’s what sustains it.

The car’s being raised onto the ship. And as we glide off, I look back—and ahead—upon the E75.

2 thoughts on “How does one leave an Europastrasse?”